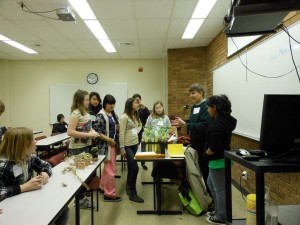 In cooperation with several Tri-Cities women’s groups we facilitate and support the annual “Expanding Your Horizons in Math and Science” program.  Expanding Your Horizons in Math & Science (EYH) is a program very similar to what is now called STEM (Science, Technology, Engineering and Mathematics) that began long before STEM became a buzz word.   It is not a career fair; it is a “role model” event.

We invite local middle school girls to participate in hands-on workshops led by women professionals in scientific, technical, engineering and other fields.  Workshops are designed to show the girls how these role model women go about their work